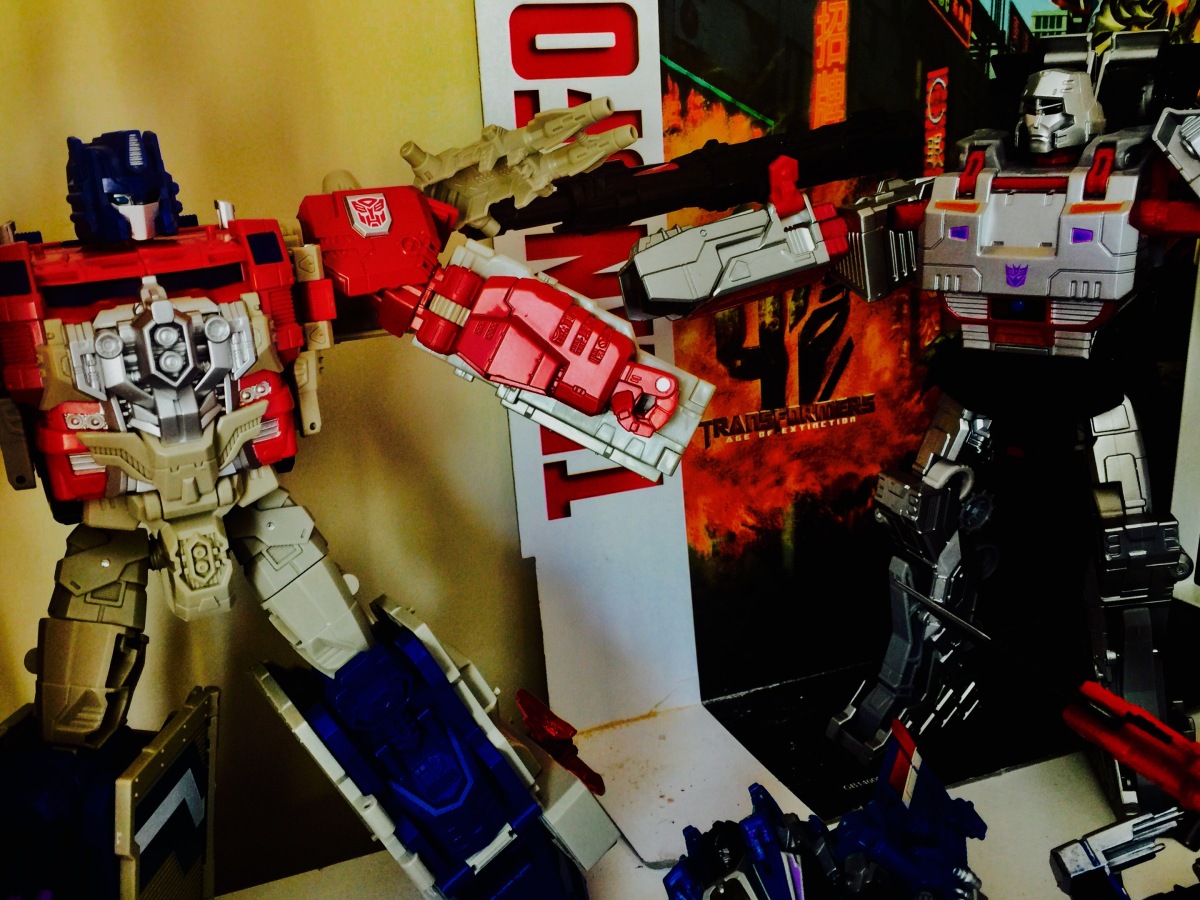 In 1999, I remember playing the Gerudo Hideout in Ocarina of Time on N64 (spoilers ahead!) and having an epiphany. There’s a part of that (awesome) section of the (awesome) game where Link is thrown into jail and has to hook-shot out. For some reason after escaping for the first time I spent the next ten minutes hook-shot-gliding around. At this late stage of the game, I had already spent about 15 hours in possession of said hook-shot and the novelty had worn off. As I darted about avoiding Gerudo guards a nugget of hope entered my brain; what if someone made a Batman game like this. Fast forward ten years and Rocksteady Games (cue Hallelujah music and bright lights fall on their name) did – to great success. The silent predator sections of the Arkham games’ origins can be followed back to Link’s adventures in Gerudo Valley. Anyway, to the point. Over the years, I’ve had this kind of feeling a few times about different games but with Transformers. The High Moon Studios games a few years ago were a glimmer of hope yet resulted in our darkest hour (Rise of the Dark Spark). Who would we like to see do our favourite robots from 1984 justice? What kind of games would we like to see?

Obviously developed by Telltale. One of the reasons recent games have failed to feel like ancient, gigantic robots battling has been the limitations of their usual style; 3rd person shooters. Think of the epic forest battle in Revenge of the Fallen or the battle of Autobot City in Transformers the Movie (1986)! That kind of action can only been fully realised if in set pieces and quick time events. Imagine as well, the kind of choices you could face in a Transformers adventure game. Who do you give the Matrix to; Ultra Magnus, Hot Rod or Grimlock? How do you plead; guilty or innocent? There’s plenty of scope for games like this and with acres of source material to draw from, an original or existing tale could be told effectively through Telltale’s extremely popular style of games.

Transformers: Last Stand of the Wreckers

Arkham Asylum and its sequels were inspired – among many influences – by Grant Morrison’s Arkham Asylum graphic novel. Although the plot and tone is distanced from it, the spine of both stories is the same; the Joker sends Batman through the crucible of a night in Arkham.

IDW’s recent, fantastic run of Transformers comics could be suitable inspiration for an Arkham-esque adventure. Recent storylines have seen Rodimus and half the transformers leaving their homeland in search of the Knights of Cybertron, Starscream ascending to leader of the planet after the Great War ends and even Deadpool-like breaking of the fourth wall as a certain Autobot experiments with suspect weapon technology. One day of the most revered IDW stories is Last Stand of the Wreckers. Similar to Arkham, a band of hardcore Autobot soldiers must infiltrate an overrun prison fortress with maximum security.

Throughout the graphic novel, there are revelations which test the Decepticon’s loyalty to the cause, make the reader question how far the Autobots can legally go to eliminate their foes as well as what the notion of right and wrong is in a world where a species has been at civil war for millions of years. High Moon’s original game (War for Cybertron) dipped its toes into this – especially with some creative environmental storytelling – yet the later games (Fall of Cybertron and so on) lost their way. Platinum Games’ G1 inspired Devastation was another interesting false dawn. If a third person action/shooter is going to work, this would be the way to do it.

It was actually playing Halo 3 that a Bungie created Transformers game crossed my mind. Although decent games, the Halo lore and narrative has never grasped me. Enter Destiny. The mix of game modes would be an ideal fit for a franchise which has always struggled with an identity crisis. The story mode would be a standard run and gun adventure punctuated by sparrow/alt mode hopping in between. Expand to the meat of Destiny’s services and it gets a bit more interesting.

Firstly, Patrol’s radiant quests would be an ideal fit for pop in/out gameplay taking out pockets of opposing Autobots/Decepticons. Imagine jointing two other comrades to take down Strike bosses (“it’s Starscream!”) or even a raid mode. I refer you back to the possibilities mentioned previously; Autobot City or Last Stand of the Wreckers. It would be an ideal opportunity to blend familiar Transformers settings like Earth and Cybertron with fan-favourites like Junk, Quintessa, Nebulos or Athena. That’s before we even get to PvP options – one of the more fondly remembered features of High Moon Studios’ series.

In the eighties the (quite quick actually) rise and fall of Transformers ended with an increasing number of ‘master’ gimmicks. One of these were ‘Headmasters’. The G1 cartoon’s fourth season – only 3 episodes long – introduced of smaller aliens/people controlling/working with larger Transformer avatars. Galvatron quite rightly chastised his Decepticons for allowing their bodies to be changed like this.

Thankfully the Japanese version of Season 4 retconned this so the Headmasters were smaller Cybertronians outcast on the planet Master. Anyhoo, the Headmasters – recently rebranded in a new toy line by Hasbro as ‘Titan Masters’ have got huge scope for a multi-scale adventure. It would be awesome to take on larger transformers in your titan-sized transector avatars before going in for smaller, different (possibly puzzle, stealth, exploration?) gameplay sections as a Titan Master. Why on Earth not?

I’ll admit it; sadly, toys to life is dead. Although profitable and well, fun, they do not seem to have earns the likes of LEGO and Disney enough £££. Sales of Skylanders are dropping off too. Hasbro has seen great growth with their resurgent Transformers brand over the last ten years however the recent movie Transformers: The Last Knight has shown signs the boom is too tailing off. A romantic view would be Transformers could swoop in an save toys to life though admittedly unlikely. A Marvel Heroes Omega style character collection game would be an ideal fit. There have been softer, mobile-centric Transformers/toys to life integration but nothing which could be described as a killer app. Surely there is some way of marrying the two.

Where would you like to see Transformers go? Any of these? Somewhere different? Or is it time for them to head to the scrapyard?